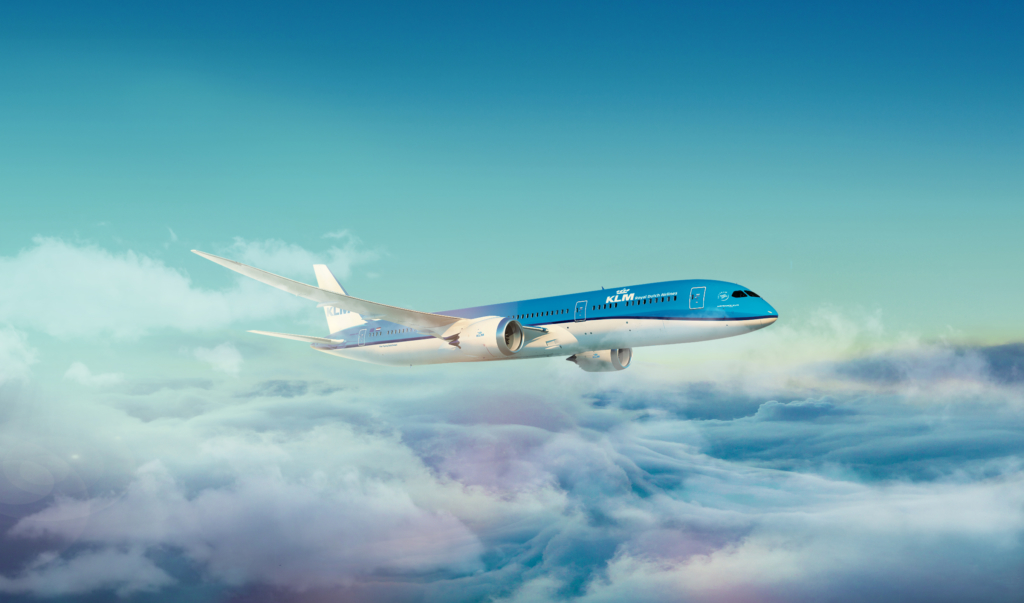 As sustainability becomes an increasingly more pressing topic, we’re looking everywhere to see where we can make a difference, in our homes, in our holiday gifting, and even in our flight choices. When flying, carbon emissions are nearly impossible to avoid and single-use plastic becomes the mode of choice, but with the right airline, these aspects are less negatively impactful. In partnership with KLM Royal Dutch Airlines, we explain how they take meaningful steps to reduce their environmental impact, and how you can, too, when you choose to fly KLM.

These three Rs are some of the first bits of environmental knowledge we all learned growing up, and KLM applies these to their practices every day, from their cockpit to their cargo. Not only have they taken thoughtful steps to reduce the waste they produce, but they are one of the only airlines with in-flight recycling programs, so you don’t need to worry about your single-use plastic ending up in a landfill. In fact, the recycled plastic goes right back into their supply chain to reduce the amount of product they need to buy. One of the most notable ways is that these bottles are broken down to create the filament that makes up three dimensional printers, which in turn, saves KLM’s Engineering & Maintenance department time and money.

The lighter the cargo weight, the less carbon emissions the flight produces. Food trolleys were reworked to be 8-5kg less in weight than most others, their drink cups weight 70% less than before, and even their cutlery and meal trays are smaller in size than normal (not only to reduce weight, but to reduce how much material is required to produce it).

These steps are not for show, though, as they have taken numerous steps to reduce weight and waste in places we as a passenger cannot see. Pilots typically have a flight plan printed out, but KLM introduced iPads, so not only do they reduce the weight of many pieces of paper, but they also reduce paper usage in the process. Even things such as cargo netting and trolleys have been reworked to carry an overall lower weight.

Reducing Carbon, One Flight at a Time

The one aspect of environmental impact consumers have very little control over is the carbon emissions released on their behalf. With KLM, you don’t have to worry so much. They’ve created a roadmap to carbon reduction, which they define as “a plan that combines the available solutions of today with innovative developments for tomorrow.” Their numbers show that they’ve done this successfully, too. A goal they’re currently aiming for is to reduce CO2 emissions by 20% per customer by 2020 – as of the end of 2018, they had already reduced by 17% per person. In true sustainable company fashion, 2020 isn’t far enough in the future to be thinking, so they’ve already created a goal of aiming to reduce their overall carbon emissions by 15% in 2030, in comparison to their emissions in 2005.

In addition, they’ve implemented a program entitled CO2ZERO, which allows customers to get in on reducing their emissions on their own. In fact, they were the first airline to introduce this option over a decade ago. With this program, KLM has become a carbon neutral, and in some cases, carbon negative, flying option. It works super simply: either while booking, or on the KLM app, indicate that you wish to compensate your carbon emissions. They work to calculate your emissions on the backend, taking into account what type of aircraft is being used and the distance being flown. The donations from your carbon compensation work directly to positively impact the environment. KLM invests these compensation funds in CO2 reduction projects certified with the Gold Standard for Global Goals. An example of CO2 reduction projects that KLM actively utilizes is a reforestation initiative; by planting more trees, you are allowing trees to absorb that CO2 emission from flights while simultaneously producing more oxygen for us to breathe.

KLM is also working to introduce a more sustainable fuel option, referred to as Sustainable Aviation Fuel or biofuel. This fuel is usually comprised of cooking oil, or is derived of plant-based ingredients, and in turn, can reduce carbon emissions by 85% per flight.

Though many companies claim to be sustainable, it can be hard to believe it without seeing it. This is something KLM gets incredibly right: they are wildly transparent about all of their emissions and all of the steps they take to reduce their overall footprint. This information is available on their website across nearly 100 different articles and can be found sitting in an easily accessible Instagram Story Highlight

Five Staycation Ideas for Those Not Traveling Right Now

It’s a tricky time as we all know, navigating the holidays during a global pandemic. We want to be safe and responsible, but also have a sense of normalcy. Maybe you’ve decided to do things differently this holiday season and not travel outside your state. Whatever it is you decide, we’re not here to judge!…

So You Have Eco-Anxiety – Here’s What to Do

You may have heard the term “eco-anxiety” floating around the social media these days and relate to those two words now more than ever! We understand and, frankly, we feel it too. As we inch ourselves closer to the end of the year, we have been reflecting on what this year brought and we’re not…

Upstate is Begging You

Nestled between the Hudson River and the picturesque Catskill Mountains, the Hudson Valley has always been a treasured haven for those who call Upstate, New York home. Roughly two hours north of New York City, the capital of the relentless and the frenetic, the Valley offers a chance to reconnect with nature, with freedom, and…